A journey from socket to socket. First ever trip across Africa in an electric car.

Another trip across Africa (my second to date) but what makes mine so different? I became the first person to cross African continent in an electric car. 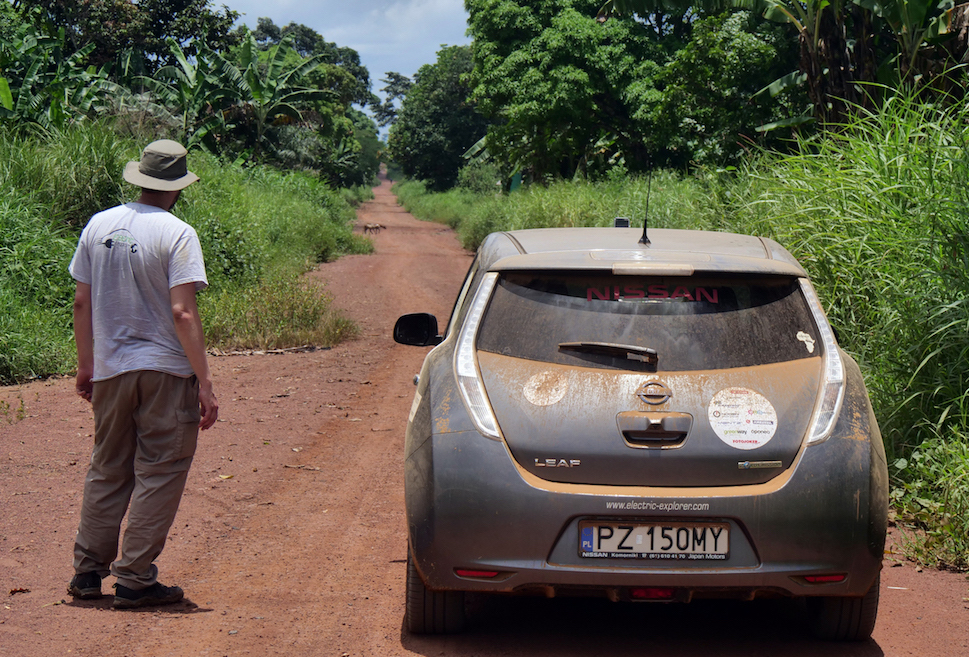 But let me start from the beginning. Travelling has always been in my blood and it took a while for me to find the courage to leave behind the conventional work/ life routine that is so ingrained in us all and step out into the world and travel unencumbered. My grandfather (my name sake) was a Polish traveller and writer, and I grew up around this legend of a man, reading his many books that became part of the school curriculum in Poland. His memory lives on in his home-turned- museum, a place I have fond memories of. I guess you could say I inherited my love of traveling and exploration from him.

It was while I was living and working in London that I became fed up with the mundanity of things….but it was also where I found the courage to move back to Poland so I could realise my dreams of travelling. So I moved back to Poland where I put into action my plans.

Cut to 2018, from Cape Town, South Africa to Poland, in a first generation Nissan Leaf, 100% electric, unmodified car with 30 kWh battery and a range of around 200 km on a single charge. A trip that lasted 97 days (the African part of the trip) and for which I had been preparing for well over a year. In this day and age of economic living and awareness, we have recently seen the rise of electric cars. But this change in many parts of the world remains slow, and awareness of the advantages of EVs is still overshadowed by a general distrust of anything new.

With this in mind, as well as a strong desire to challenge myself on unexplored grounds, I wanted to put to the test a standard electric car, and put it through its paces, specifically in Africa. The challenge was to find out whether or not it would be possible to drive such a car across this great continent.

I hired a photographer, Albert Wójtowicz, who accompanied me for most of the trip and who had also previously traveled and worked with me during my first trip across Africa in 2014, and across Asia in 2016. His role was to photographically document this journey.

I had anticipated many obstacles, for which I needed to have in place a well thought out plan and strategy. With its limited car range, often long (sometimes vast and empty) distances to drive through and no infrastructure necessary to recharge on the way, it was important to learn how to drive economically in order to preserve energy and extend the car’s range.

On a few occasions, I had no choice but to test the car to its absolute limit, fighting for every last kilometre of range to reach my next location. On many occasions I managed to drive over 260 km on one charge, with a record of reaching 278 km on a single charge with some energy still left in the battery. Leaving the battery with a small amount of energy and range at the end of my day was a deliberate part of my strategy.

With the constant uncertainty that there would not be any sufficient sockets or electricity at my day’s destination, I had to allow some sort of margin to remain, in the eventuality that I would need to find an alternative socket. Leaving some charge in the car’s battery also allowed me to charge the car overnight by reducing the time I needed to reach 100% full capacity. That meant that even if I had a shorter distance to travel than the maximum range of the car, with the possibility of being able to drive faster at times, I wouldn’t and still drove as economically as I could.

Despite these issues and considerations, the time required to charge the car often delayed the start of my day. About 80% of the electrical sockets available to me were 5 amps, requiring well over 20 hours of charging to full capacity.

All of these concerns required a huge amount of patience from me, sticking to the plan of (slowly) moving from socket to another socket, literally.

Staying on the main roads was how I had initially planned this trip, in the hopes that along the way I would have easy access to a town or city with some sort of electrical infrastructure. Most of the roads were tarmac but more often than not, I encountered gravel and mud which slowed me down significantly, occasionally even stopping me in my tracks. One stretch of road between Congo and Gabon, of about 280 km, took me four days to pass due to the rain, mud and water and lack of electrical grid. This particular road would be challenging even for the 4 x 4’s, and as locals had told me, would be impossible to pass with a car like mine.

With all uncertainty, these struggles, and at times wanting to resign and give up, my encounters with the people I met on the roads during this trip pushed me through. I felt genuine hospitality and kindness from these strangers, and without the help of the Africans, I definitely would not have been able to continue on through the hardest parts of this trip. At the end of the day, these people were willing to open up their hearts – and sockets- and help me, a man travelling through their country. Of course, I always offered compensation for any electricity used and consumed at any socket.

For the majority of the time, I travelled through French speaking Africa, where no knowledge of any French was a detriment, with no way to communicate and explain my needs. It was with difficulty that I managed to explain what I needed, what the electric car was, how long it would take to charge, how much it would cost etc, but I managed to get by.

Travelling overland through Africa, especially at a slow pace allows you to experience the beauty of the African landscape, which has to be one of the best things about this trip. You cannot deny its beauty, how varying it can be, drastically changing from one country to the next ,with lush green trees one moment and dusty red sand whipping around you the next. When traveling, you experience everything much more intensely through all your senses, including your mind; the heat, dust, rain, the smell of rain and thunderstorms, bread and tea, not forgetting the feeling of joy, exhilaration and at times frustration. To see this world with your own eyes and not through the glass of any screen is the best reward.

In total I crossed through 14 countries in 97 days, covering 15176 km in Africa (South Africa, Namibia, Angola, Democratic Republic of Congo, Congo, Gabon, Cameroon, Nigeria, Benin, Burkina Faso, Mali, Senegal, Mauretania, Morocco). I charged the car exactly 100 times, used 1425 kWh of electricity on average 9,5 kWh per 100 km. I paid in total for electricity usage around 230 US dollars. The maximum distance covered on one charge was 278,6 km. Often, the car’s computer was showing a range of over 300 km, after charging to full capacity. Additionally, in Europe I covered 2100 km and traveled through Spain, France, Germany and Poland. Throughout the whole trip I only relied on local sources of electricity and did not carry a power generator.

I can now say that it is possible to cross Africa with an electric vehicle. The car made it back to Poland in one piece…and so did I, ready for the next trip, stay tuned.

Currently I am working on a book where I will describe the whole journey in more detail. You can expect a short film on my Youtube channel documenting my trip soon.